Home » Blog » India’s poverty is a child and parent of women’s role in our economy and society. But a new ambition is starting to work

India’s poverty is a child and parent of women’s role in our economy and society. But a new ambition is starting to work

A roundtable on the challenges of Indian women organised by the Harvard School of Government a few years ago at the beautifully restored Bikaner House in Delhi was predictably inconclusive on whether the problems — and solutions — lie with society or the economy. But changes in our economy (women’s access to income) and society (women’s aspirations, treatment of women and girls by men and elders, influence, beliefs about women’s potential) need simultaneous work to create a virtuous cycle. I believe this virtuous cycle needs Beti Bachao, Beti Padhao, Beti Swastha Badhao and Beti ko Rozgar dilao.

While a new ambition for women is starting to work, another decade of persistence (Gender 5.0) is needed to reach escape velocity.

Most people think about gender bias in terms of economics (labour-force participation and missing GDP) or interpersonal dynamics (men being insensitive to women). But gender bias is a set of interlocking dynamics with lots of well-meaning people implementing and protecting systems, practices, structures and institutions that fundamentally exclude, disenfranchise, and marginalise women. I can’t claim to understand the situation of all women, but I know politics is not an easy calling; I think many women will enjoy and relate to the chapter “On being a woman in politics” in Hillary Clinton’s recent book.

Even if there is some of what American sociologist William Ogburn calls a “cultural lag” — the mismatch between the material conditions of life which change quickly and behaviour and attitudes, which are more resistant to change — huge progress has been made. Gender 1.0 was set off by Raja Ram Mohan Roy. Gender 2.0 came from Gandhiji’s recognition that the freedom movement “walked on one leg”. Gender 3.0 was votes for everybody in 1947 (some women in Switzerland only got voting in 1971). Gender 4.0 started after 2014 with schemes like Beti Bachao Beti Padhao, Ujwala, Maternity Leave Bill, and many other initiatives. Gender 5.0 will include working on men and issues such as triple talaq, fixing our employment exchanges, more learning outcomes in schools, more formal enterprises, more apprentices, more cities, more manufacturing and macroeconomic stability.

Any agenda for women’s empowerment will not be sustainable unless women are empowered to pursue it for three reasons. First, research suggests the strongest predictor of women’s empowerment is having waged work and parents are more likely to invest in girls if there is a strong economic return to having them. Second, reservation is important to discuss — research suggests that getting women into political leadership roles changed parental aspirations for girls and even closed the gender gap in education in some states. Third, many issues for young rural males — especially in North India — likely increasingly relate to the social problems associated with skewed sex ratios.

We need to creatively design policies to counteract the market failures caused by cultural norms, for example, in designing employment exchanges we need to address lower registration by women by having information campaigns on returns to employment for women. In designing apprentice schemes, we need to require factories to invest in hostels and child care that will get women to take up apprenticeships. In reducing labour laws, we need to push harder to remove discriminatory acts like The Factories Act 1948 that prevent women working at night. I am hopeful both productivity and culture will respond. Gender 5.0 could raise labour force participation to above 30 per cent quickly.

Tourism, education and healthcare — probably the fastest-growing areas of jobs for the next decade — hire more women for many reasons but jobs near home attract women workers. Mckinsey estimates India could add $490 billion to its GDP by 2025 by increasing female labour force participation that would add 68 million more women to the labour force. But we don’t live an economy but a society — the latest NSS round suggests that 31 per cent of women engaged in domestic work state that they would like to work for a wage. Women face significant restrictions of mobility — past Indian human development surveys suggest over 50 per cent of female respondents report needing permission to go to a kirana store. And women working or controlling money lowers rates of domestic violence.

Rajasthan is doing its part. The PM’s ambitious Beti Bachao Beti Padhao simultaneously targets the sex ratio and girl’s education; Jhunjhunu and Sikar have been recognised as two of the best performing districts nationally. Our Mukhyamantri Rajshree Yojana, started in 2016 to offer financial support for girls from birth to the completion of class 12, has benefited more than 11 lakh children. Our Mukhyamantri Hamari Betiyan Yojana offers scholarships to meritorious girls after class 10 up to Rs 2.25 lakh per year. Our Padmakshi Award started in 2017 recognises district exam toppers in Classes 8, 10 and 12 with a certificate and cash award of up to Rs 1 lakh. We have distributed more than 15,000 scootys for post-class 10 meritorious girl students from low-income families and 12 lakh bicycles to girl students who enter class 9. Similarly, we distribute 27,000 laptop computers every year to girl students who score 75 per cent or more in Class 8, 10 and 12. And our Menstrual Hygiene Scheme is creating awareness about the issue among women of reproductive age. And women were the obvious anchor for our flagship Bhamashah programme that pioneered direct benefit transfers in 2008.

Nelson Mandela said, “Like slavery and apartheid, poverty is not natural. It is man-made, and it can be overcome and eradicated by the actions of human beings”. 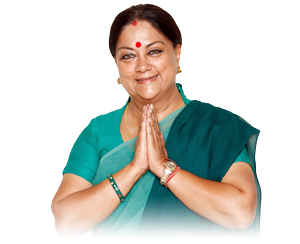 Smt. Vasundhara Raje. (The author is Chief Minister of Rajasthan)