CM Vasundhara Raje meets with Kyoto business leaders; Says it will be easy to invest in Rajasthan

Over 150 top executives from a number of Japanese companies attended the seminar. So did members of Kyoto Chamber of Commerce & Industries. JETRO representatives explained in detail the advantages Rajasthan offered. Executives of Hitachi Chemicals and Nidec who have plants in Neemrana, came out openly in support of Rajasthan as an investment destination. The Labour sector reforms and policy framework of the State Government was much appreciated.

Smt. Veenu Gupta, MD RIICO made a presentation on Rajasthan as an investment destination. A short film was also screened. Chief Minister extended an invitation to attend the Resurgent Rajasthan Partnership Summit on 19th and 20th November 2015 in Jaipur, being organized by the Government of Rajasthan. She briefed the gathering on Neemrana and Ghiloth, the incentives made available and the infrastructure created. She assured all present that the entire state machinery would be available to resolve issues that investors might face from time to time.

“The Summit will be the Rajasthan government’s flagship event where investors will get a chance to review what the state has to offer and companies will get an opportunity to pursue their business and investment interests.”

Rajasthan was where all the excitement was. 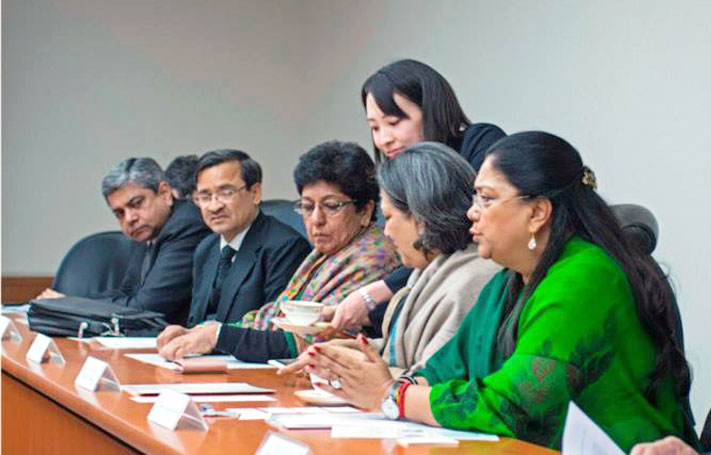 In the afternoon, Smt Raje visited the HQs of Kyocera Corporation. The interaction focused on Kyocera’s varied portfolio in ceramics, jewel, solar panel manufacturing, industrial ceramics and electronics. A guided tour of the Kyocera Museum was organized.

In the evening , Chief Minister had a detailed meeting with Chairman Nidec Mr. Nagamori and his team of executives. President Nidec India, Mr. Takano was also present. The two teams discussed in detail a range of issues regarding Neemrana and the future expansion plans of Nidec in India. Nidec is the world’s largest manufacturer of industrial and other motors. Mr. Nagamori mentioned fondly his meeting with Prime Minister Narendra Modi, in New Delhi a while back.