Opposition needs to remove political spectacles, development is visible all around

CM’s Reply on Vote of Thanks to Governor

Chief Minister Smt. Vasundhara Raje has said that development during past 4 years would be visible all around in the state, for which the opposition has to shed away its political spectacles. She said that Rajasthan ranked as top state in the country in several sectors, but unfortunately the opposition was not willing to recognize this fact. She said that her government would continue to work on the pledge it took to serve the people through good governance and ensure that Rajasthan stands first in all sectors.

The Chief Minister was addressing the State Assembly on Friday while replying to the debate on the motion of thanks to the Governor’s address. She said that Rajasthan became a leading state in the country in toilet construction and innovations like Bhamashah scheme, setting-up of e-Mitra Centres, Intra-state air connectivity amongst cities, setting-up of Annapurana Bhandars. But, these activities were not visible to the opposition because they were not ready to shed political spectacles to see all this.

Smt. Raje said that during past four days, while debating on the Governor’s address, the opposition benches focused only on the victory in three constituencies and their quest to grab power. But, visualizing future on the basis of one victory would turn to be nothing more than day dreaming. She said that her government had full confidence on the policies it framed and the development works it carried out. Such development was visible to the common man and the schemes laid by the state and the union government was bringing positive change and prosperity in the life of the commoners. She said she had full confidence on the organization, party workers and the people. In the coming elections the lotus will bloom again and we will form government. We will be sitting here and you will be sitting where you are now, she added.

The CM said that every step of the opposition party, when they were in power, was full of lust for power. Who else would know the trick of fighting polls to win power, she said. The Chief Minister added that they did it for 50 years and remained in power. They used legendary leaders’ names to grab power and never followed their path. They kept chanting Gandhi’s name, but did not focus on sanitation. They talked about Sardar Patel, but imposed emergency in the country. They divided the public into different vote banks and weakened them. This was how, the opposition party kept in power for long, although we continued serving people with devotion.

Smt. Raje said that Prime Minister Shri Narendra Modi paid a real tribute to Gandhiji by taking hefty step of Swachh Bharat into his hands. Looking at the opposition she said, “We also full-filled the dream of your leader Late Rajiv Gandhi, who said that the beneficiaries were getting only 15 paisa out of Re 1 released from the Center for their welfare. We have given Bhamashah Scheme to the state which eventually stopped the leakage and ensured transfer of full amount to the beneficiaries’ account.

The Chief Minister said the previous government installed plaque of 51,000 crores in the state for election benefit. After coming into power our government started work giving regard to those plaques. The congress government installed plaque for Refinery in Pachpadra without any plan and budget provisions. We brought this game changing project on ground keeping in view the public interest and knowing our Rajdharma, she said. Opposition should say thank to our Prime Minister and Petroleum Minister who helped in saving Rs. 40,000 crores burden in Refinery project, she added.

Smt. Raje congratulated the newly elected MLA from Mandalgarh Shri Vivek Dhakad, Newly elected MP from Alwar Dr. Karan Singh Yadav and Ajmer MP Dr. Raghu Sharma. She expected that the newly elected MPs and MLA would fulfill the expectations of the people of their constituencies. She said we accept the recent results as a wake-up-call and will speed up the development journey of Rajasthan.

The Chief Minister appealed to the members of opposition that they should not consider themselves separate from us as opposition is also an important part of the Team Rajasthan. She asked opposition to walk together in this journey of development. She said ruling party and opposition both together fulfill the definition of democracy. The role they both play may be different but it is the duty of both to maintain the dignity of the house. She vowed that facing all the challenges we will make Rajasthan frontrunner. 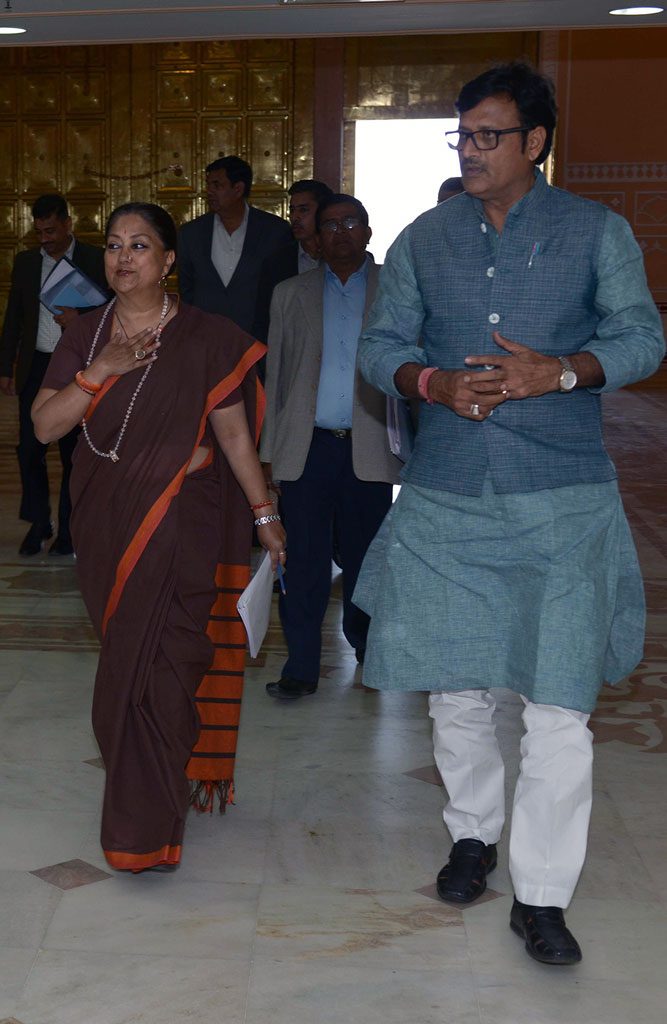