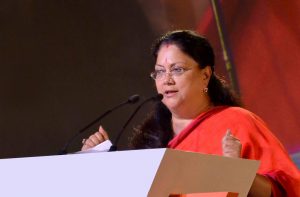 The India-Singapore Strategic Partnership was signed last November between two nations. But Prime Minister Narendra Modi’s strategy of co-operative federalism means that one of the vehicles of this strategic partnership is states; today Rajasthan and Singapore inaugurate a partnership [1] that will bring world class skill development in tourism and hospitality to the youth of Rajasthan with the launch of the Centre for Excellence in Tourism Training (CETT) at Udaipur. This partnership for tourism builds on the launch of a direct flight from Singapore to Jaipur earlier this week. During this visit of the Hon’ble Prime Minister of Singapore to launch CETT, Rajasthan will also extend our partnership by kicking off projects to improve the tourism ecosystem in Jaipur and Smart Urban Development.

India’s partnership with Singapore is hardly new; since the Chola period our country has not viewed immigration to this tiny nation as brain drain but brain circulation. And some of my earlier childhood inspirations came from the women in uniform of the Indian National Army based in Singapore. In his wonderful book The Singapore Story [2], late Prime Minister Lee Kuan Yew, said “The task of the leaders must be to provide or create for them a strong framework within which they can learn, work hard, be productive and be rewarded accordingly. And this is not easy to achieve.” A rapidly changing world is a world that will be inherited by learners; Rajasthan is delighted to partner with and learn from Singapore.