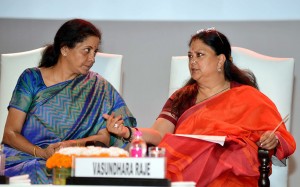 Successful meet draws to a close with business announcements, EoIs, investment proposals
Rajasthan to get its own National Institute of Design

The Resurgent Rajasthan Partnership Summit 2015, organised by the Government of Rajasthan in association with the Confederation of Indian Industry (CII), concluded here today on a highly successful note, with participating businesses from across India and abroad reposing their faith in the compelling appeal of Rajasthan as an investment destination.

“I thank the Hon’ble PM Shri Narendra Modi for his support & for nurturing ecosystem of strong, empowered states.” Appreciative of the support extended to Rajasthan, she said, “The Government alone cannot do what we dream for Rajasthan. Our partners need to be on our side at every small step, at very large strides. The response and excitement here during the summit was palpable and it is indeed a beacon of hope and boost in confidence that we are on the correct path and we have friends in whom we can trust.”

“The easy part is over now. The next steps shall involve us burning the midnight oil in implementing these investments and creating jobs for our people.”

Job Creation is one the three pillars of the Rajasthan Model of Development, the other two being Social Justice and Effective Governance.

Smt. Nirmala Sitharaman, Union Minister of Commerce & Industry and Chief Guest at the Valedictory Session, said, “Resurgent Rajasthan 2015 has been a huge success. Reverberating with the spirit of collaboration and cooperation, the summit has collaborated with stakeholders from various industries across value chains, jointly exploring opportunities for individual and collective growth by exploring new models of economic development and partnerships.”
Smt. Sitharaman said there was revival of industries in Rajasthan and acknowledged the efforts of the State government in strengthening MSMEs. Going forward she hopes to see Rajasthan in the Top 3 in the Ease of Doing Business ranking.

Announcing the launch of a new National Institute of Design (NID) campus in Rajasthan, Smt. Sitharaman said, “This institute will help address the technology design needs that arise from increased industrialization and the growth of technology-intensive industries in the state.” She has sought the cooperation of the Government of Rajasthan in setting up the institute, which will initially be a satellite centre for the NID campus in Ahmedabad. Later, this institute will provide undergraduate and post graduate courses.

Mr Rajendra S. Pawar and Mr Shreekant Somany hailed the State Government’s effort in organising a great summit and were appreciative of the reforms agenda being pursued with vigour by Rajasthan.

Smt. Veenu Gupta delivered the vote of thanks at the closing ceremony.