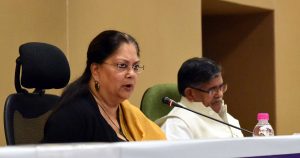 Chief Minister Smt. Vasundhara Raje has said that if police officers perform their duties with diligence, alertness and sensitivity then they would to prove their motto of Trust in Public and Fear in Criminals. She said that for effective control on criminal activities and maintenance of law & order the police should have to be reactive as well as proactive.

Smt. Raje was addressing the Superintendents of Police and senior police officers on the 3rd day of Collector-SP conference at Chief Minister Secretariat on Saturday. She said that police is that part of administration which deals with the public the most. “Therefore, it is must that functioning of police, their behaviour and help empowering the needy,” she said.

The CM said that good governance, service delivery and development were possible only when the people and the communities felt a sense of security. She called upon the police officers to become a professional force which honoured the peoples’ rights. She suggested the district SPs to adopt innovations, IT tools and social media to perform their duties with more alertness.

Smt. Raje said that a person would visit police station only when she or he was in dire need of help. Providing him relief by registering the FIR would be the first step. The police should be more sensitive in such cases. She said that timely action of the police was of utmost importance. “If general public grievances are heard in time, situation may be averted for getting tense, she said. She further suggested the police officials to have regular dialogue with public and gather first hand information of the sensitive issues.

The Chief Minister said that in certain situations even smaller steps could build positive image of the police force. She said that they should interact more with public during events like religious gatherings, padyatras, fairs and rural sports events or army recruitment rallies. She said that Rajasthan being a peace-loving state, the cops should keep a stringent control over the criminal elements and show zero tolerance towards illegal arms.

Smt. Raje directed the police officers that they should be more sensitive while investigating the cases of crime against women, children, elderly persons, scheduled tribe and schedule class people. She suggested that effective crime control was possible using IT and social media tools. She said that such platforms would help in stopping rumours.

The CM directed the district SPs to increase participation of CLG members in policing. She said that more women should be nominated as members of community policing groups. This could help in proper and timely investigation of cases. She asked for coordination between other state police paramilitary forces and army in brining dawn cases of road accidents.