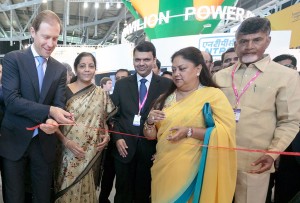 Smt. Raje was addressing a business seminar on New Industrialization & Industrial Corporation organized by Russia-India Business Forum at Yekaterinburg on Monday. Before this, the CM also held a meeting with the Head of Government of Sverdlovsk Oblast region Shri D. V. Pasler and the local business delegates.

Addressing the seminar, the Chief Minister said that Rajasthan and Sverdlovsk could complement each other for engineering and mining sectors. She said that engineering and automotive sectors were growing in Rajasthan. About 150 companies were already making automotive components in the state and mutual cooperation could further strengthen these sectors.

The CM said that since Prime Minister Shri Narendra Modi formed the government, cooperative federalism was being encouraged. Indian states were now reaching out to global community. With this vision Rajasthan to had partnered with many countries. During her maiden visit she wished for a long standing friendship with Russia.

Smt. Raje said that Rajasthan was the largest state of the Indian Union – almost the size of Germany. It was home to 77 million people, which makes our population larger than that of France, UK, Italy & Canada. With a GDP of 84 Billion USD at constant prices, its economy was larger than that of many global economies. Rajasthan’s economy was growing faster than many of the leading states, accounting for half of India’s GDP. In attracting new investments, as per Reserve Bank of India survey, it was ranked 3rd in the entire country.

The CM said that Rajasthan boasted of the largest National Highway and Railway network in India. It was surplus in power and a global leader in Renewable Energy. Also, the state accounted for country’s one-fourth of crude oil production. She said that Rajasthan was also home to a thriving IT and ITES industries and could therefore offer significant value addition to products coming out of Russia.

Smt. Raje said that her state also understood importance of investment in Startups. To address the challenges of that sector a Startup policy had been put in place. There were ample opportunities for Russian entreprenuers for investing in heavy machineries sector. By placing themselves in Rajasthan, Russian companies could make easy access to consumer markets of Delhi-National Capital Region and Greater Mumbai regions.

The CM invited the Russian companies to participate in the Global Rajasthan Agritech Meet (GRAM) to be organized in November this year. Many global and national companies had been invited to showcase their latest technologies and Russian firms could take benefit of this event, she added.

The CM said that Ekaterinburg was the main industrial centre for heavy machinery, metal processing and metallurgy and Sverdlovsk had expertise in metallurgy, mining and extraction. On the other hand, Rajasthan had a virtual monopoly in production of minerals like wollastonite, lead, zinc, calcite, gypsum, rock phosphate, silver, marble, sandstone and green marble etc. Thus, large partnership opportunities existed in mineral exploration and extraction. Also, sharing of best practices, technologies and trainings in the field of mining and metallurgy might take place between two regions, she added.

Talking about the possibilities in defence manufacturing sector, the CM said that Russia was the second largest exporter in the world, while India a big consumer. She invited the Russian defence manufacturing companies for investment in Rajasthan saying that it was a priority sector and large tracts of land as well as testing grounds could be provided here for this, along with easy access to the national capital, Delhi.