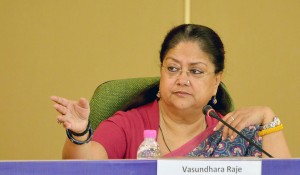 Chief Minister Smt. Vasundhara Raje has said that AAA programme being executed in Jhalawar district by Tata Trusts’ associate Antara Foundation for improvement in mother & child health and their nourishment levels would be expanded to other districts as well.

Smt. Raje was addressing the officers on the second day of District Collector-Superintendent of Police Conference at the Chief Minister Office on Thursday. She asked the officials to identify districts of different geographical conditions to scale-up this programme and suggested for special attention to the districts falling in Tribal Area Development region.

Founding Director of Antara Foundation Shri Ashok Alexander gave a presentation during the meeting on AAA Programme, also known as Akshda Project, which aimed for improving mother & child health and nourishment indices in Rajasthan. Under this project, three frontline workers, the Auxiliary Nurse & Midwife (ANM), the ASHA Worker and the Anganwadi Worker, jointly identified as AAA, do mapping of the village for recording health & nutrition related details of each pregnant women, lactating mothers and newborns.

Shri Alexander said that this project was showing good results as the entire functioning of these three health workers became easy when they joined each other. Adolescent girls of the village, aged between 13 and 19 years, were also being made part of the project. These self-motivated girls help the three A’s in tracking health condition of their subjects. He said that the mapping of all the villages of Baran and Jhalawar would be completed by end of 2016.
During the presentation, Health Minister Shri Rajendra Rathore said that the problem of high MMR or IMR could be controlled effectively with the Anganwadi worker joining the ANM and the ASHA. Vice Chairman of the State-level Committee for Monitoring of 20-point Agenda Dr. Digambar Singh said the innovative idea of the adolescent girls partnering in the project would yield good results.

On this occasion, the Members of the Council of Ministers, Parliamentary Secretaries, Chairpersons of various Commissions, Chief Secretary and senior officers of all government departments were present.