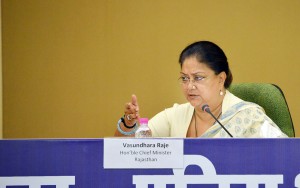 Chief Minister Smt. Vasundhara Raje has said that her government is committed to improve ‘Khushhali Index’ of the state and take it to the league of top performing states. She urged that the Team Rajasthan should gear up to achieve the vision of a healthy, educated, gender sensitive, economically well-developed and prosperous Rajasthan.

The Chief Minister was addressing the inaugural session of the three-day District Collector-SP Conference in Chief Minister’s Office on Wednesday. She directed the collectors to focus on Bhamashah Health Insurance Scheme [1], Aarogya Rajasthan [2], welfare of senior citizens and children, drinking water and electricity supply and curbing seasonal diseases. She emphasized upon to give special attention to labor welfare schemes and information technology services along with the flagship schemes of the state government.

The Chief Minister asked the district collectors and other officers to do regular as well as sudden inspections of homes for specially-abled, childrens’ homes, hostels and old-age homes etc in their respective regions. She said that there should be no deficiency in supply of quality food, safe drinking water, health services, sanitation and other facilities in these homes. She made it clear that incidents like deaths of children in Jamdoli would not be tolerated at all. She asked the Chief Secretary to issue orders for the Divisional Commissioners, District Collectors, SDOs for regular visit to these residential facilities. She directed the Ministers for surprise visit of these places.

Smt. Raje said that we needed to be more sensitive in relief works as nearly 14 thousand villages in 19 districts were facing drought like conditions. Citing examples of loss of livestock in some districts, she directed for timely redressal of such issues. She said that institutional relief be provided in drought-affected districts whereas in non-affected districts local public should be supported with the MGNREGS and other such programmes.

The CM asked the collectors for weekly review of seasonal diseases and supply of water and electricity. Also, the sub-division level officers should be asked for regular meeting for time-bound redressal of public grievances. She said that problems to be resolved at the state-level should immediately be brought to the notice of senior officers.

The CM said that the health problems identified during the Aarogya Rajasthan campaign should be promptly responded with services like distribution of medicines, medical equipments, surgeries etc. She emphasized on taking support from the general public, public representatives, non-government organizations. She expressed her anguish on absenteeism of the medical staff in the hospitals and asked for strict action against such employees and officers.

Smt. Raje told the collectors that administrative behavior and personal conduct of the collectors should be fair and above the board. The collectors were face of the government in the district and their actions should reflect the government functioning. She warned them that there was ‘zero tolerance’ against carelessness, corruption and non-functioning of officers. She said that they were being watched from the top.

The CM suggested the officers that serving as a district collector was a lifetime opportunity for them to change the lives of people.

“Also, it is an lifetime opportunity for your career. If you realize the gravity of the problem people are facing and resolve these, it will give new heights to their career,” she said.

Prior to this, the Chief Secretary Shri CS Rajan shared the details of three-day District Collector- Superintendent of Police conference. Members of the Council of Ministers, Parliamentary Secretaries, the senior-most officers of all departments were present in the conference.

Back to main page of Collector-SP Conference May 2016 [3]