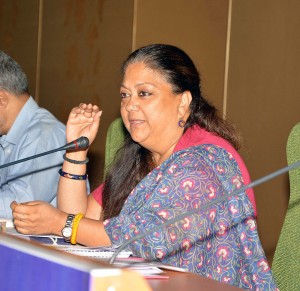 Concluding Session of the IInd Day of Collector-SP Conference

Chief Minister Smt. Vasundhara Raje has directed the districts collectors and other officials to ensure time bound execution of the various budget announcements and other important schemes and programmes of the state government. Smt. Raje was addressing the concluding session of the second day of Collector-SP conference on Thursday. She said progress will be reviewed after six months and asked collectors to come with positive results.

Smt. Raje said the National Green Tribunal (NGT) has passed an order on 4th May, 2016 stating that Environmental Clearance (EC) is to be issued to all deserving cases of Mining received till date, by 31st May 2016. The order says mines which do not have EC by 31st May 2016, shall have to be closed down. She said keeping this order in view all the district collectors should convene the meetings of District Environment Impact Assessment Authority (DEIAA) on a regular basis so that 4167 applications for EC that have been transferred by the Environment Department to respective districts could be disposed by 31st May, 2016. She directed the Environment Department and Rajasthan Pollution Control Board to extend all support to districts in terms of deputing experts and staff to assist DEIAAs in deciding the EC applications on time.

The Chief Minister asked Secretary, CSR to compile and collate data that shows works that need funding in each district and the amount of money available for CSR with various companies. She directed the district collectors to provide list and required information about CSR activities. She also directed the district collectors to be vigilant and sensitive towards the issue of child marriage. She said all Collectors have to ensure constant IEC to make parents aware of the evils of underage marriage.

Smt. Raje said extensive touring and first hand information about ground realities is crucial to good governance. She expected that collectors and other senior officers would undertake meaningful and effective tours and will make ‘post-inspection follow up’. It will generate pride in your work and install a competitive spirit within your team in the district, she said.

The Chief Minister said very soon the state government would like to switch over to a GIS tool as an important Decision Support System. We have already made a beginning by mapping out social and economic infrastructure in TAD, DANG, MAGRA and MEWAT Schemes, she said. She asked major infrastructure departments like Energy, Public Works, PHED and Water Resources as well as Education and Medical & Health Departments to map their assets on GIS.

She asked collectors and other officers to be courteous with public representatives and said correspondence and telephone calls shall have to be replied in a proper way. Smt. Raje said the Energy Department is launching a scheme known as ‘URJA MITRA’ to reward honest customers. She asked to ensure wide publicity to the scheme. She said public participation could be enhanced in electricity management through these ‘URJA MITRAS’.

In view of falling Onion prices Smt. Raje asked departments of Agriculture, Cooperation and Food & Civil Supplies to work on a collaborative strategy to prevent distress sale of Onions. She said Agriculture department must also have in place a thought out plan to address the issue of smooth supply of Soybean to farmers in Kota division and elsewhere.

Smt. Raje directed that All stations – Ajmer, Kota, Bharatpur Bikaner and Jodhpur are to ensure that the exercise of Painting of Stations should be completed as per approved theme positively before 30 June.

Smt. Raje asked collectors to hold fortnightly meetings in respect of all major infrastructure projects in their districts to remove bottlenecks and ensure quality of construction. She said this meeting can also focus on matters related to allotment of land for major investment projects under Resurgent Rajasthan and also look into the issue of pending land conversion.