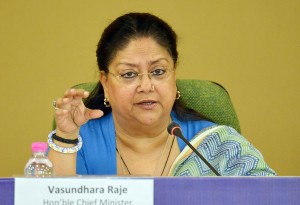 Chief Minister Smt. Vasundhara Raje has directed for strict compliance of the orders regarding special arrangement of psychologists and career counsellors for the students studying at coaching institutes in the state.

Addressing the officers during the third day of District Collector-Superintendent of Police Conference at the Chief Minister Office on Friday, Smt. Raje said that the coaching firms would not be allowed to make money by keeping students’ lives at stake.

The Chief Minister also expressed her anguish on traffic disturbance around the marriage gardens during wedding celebrations in the want of proper parking facilities. She said that general public suffers due to jam-like situation caused by parking of vehicles on the road side.

Smt. Raje said that private hostels, paying guest facilities were being operated in several localities of the cities like Jaipur, Kota etc and the officials should be alert enough to ensure that anti-social elements do not use these places as hideouts.

The CM further appreciated the innovations – such as automated traffic e-challan, payment of challan through e-mitra, traffic updates through whatsapp, facebook and FM radio, use of social media for interaction between CLG members, door-to-door verification app for tenants – adopted by the Jaipur Police Commissionerate. She said that such noval ideas must be adopted by other police districts and be publicized amongst the public.

On this occasion, the Members of the Council of Ministers, Parliamentary Secretaries, Chairpersons of various Commissions, Chief Secretary, Director General of Police, senior administrative and police officers of were present.