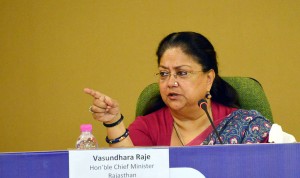 MJSA To Be Launched In Urban Areas As Well

Chief Minister Smt. Vasundhara Raje has emphasized on conservation of rainwater in urban areas along with the ongoing Mukhyamantri Jal Swavalamban Abhiyan (MJSA) [1] in rural regions of the state. She has directed the officials to develop rainwater harvesting structures in residential colonies as well common facilities in various cities including Jaipur. She suggested for use of modest technology in constructing such watershed formations.

On the second day of District Collector-Superintendent of Police Conference at the Chief Minister Office on Thursday, Smt. Raje said that conservation water not a responsibility of the villagers alone. It was extremely required to save and conserve water in urban regions as well, she said.

The CM further directed the urban planners to use modern trenchless technology while developing sewerage system and install underground ducting in the cities. She said that the city developers should be careful enough and ensure that drinking water supply lines and sewerage lines were not laid parallel.

Smt. Raje asked for urgent action on shifting of central prisons out of the densely populated localities in 16 districts. For any reason whatsoever, this matter should not linger on anymore, she said.

The CM said that the possibilities should be explored for running the ESIC Medical College and Hospital, in Alwar district, by the state government on its own or under the public-private-partnership model.

During the conference, district collectors and divisional commissioners of Kota, Jodhpur, Jaipur and Bikaner divisions gave presentations. Issues related to public grievances redressal, drinking water supply, development of residential colonies in different local body regions, encroachment in and rehabilitation from the forest areas were discussed among others.

On this occasion, the Members of the Council of Ministers, Parliamentary Secretaries, Chairpersons of various Commissions, Chief Secretary and senior officers of all government departments were present.

Back to main page of Collector-SP Conference May 2016 [2]